This binary exploitation challenge was the hardest in my opinion. You have no binary to analyze, just an IP/port to connect to.

The service asks for a name, then outputs some strings:

We are unable to crash it… but if we input enough characters (136), they start to appear in a second buffer, the one that prints *** initially. It also outputs some debugging message, indicating the return address of the current function.

Let’s check if we can use some format strings:

Note that the 18th parameter points to our buffer. We’ll use this later on for dumping and writing.

We have some good primitive there, but we need something more to analyze. We know that the return address for the current function is 0x8048702, a 32bit binary. We’ll dump 0x2000 bytes starting at 0x8048000, which is probably the base address.

To do that, we’ll use format string vulnerability. We’ll create our payload with the address we want to read, pad the first stage, then make the second buffer to print %18$s, then write the results to the destination file.

There are some issues when sending some bytes (\x00 and \x0a). We’ll have to live without them.

After loading the file in IDA, we have something very similar to the original binary. The import table is broken, but we can figure it out dumping the GOT table for those functions using the rawdump() function above. It helps knowing the libc used, it’s the same one from other challenge.

Once we rename those labels, we get this: 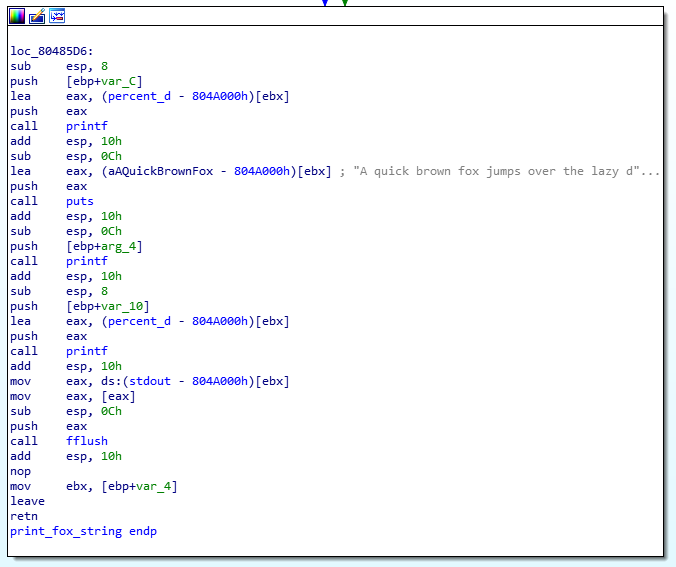 We can, for example, overwrite the GOT of printf or fflush, that are called after the vulnerable printf. We need to figure out the address to overwrite, and where it should point.

Let’s try to get some stack pointers that we can use. It’s the same method as before, but instead of supplying a pointer, we’ll dump stack values as pointers (%p) and strings (%s). Here’s the output of the dumpstack.py script:

The interesting parameter is 8. It’s a pointer to our buffer. We can create a shell payload on that buffer, and try to jump to it. It’s in the heap, so let’s hope it’s executable. (It was on other 32bit challenges).

Here’s what we need to do:

Here’s the final exploit, you can download the complete file later.

This challenge was quite hard for me, but it could have been much worse: NX on the heap, ASLR enabled, PIE, … :)

It was fun, nonetheless.